Here’s my new project. It’s one 30-minute track. Download it for FREE here:

All I ask in return is, if you like it, to sign up for my email list. And to go along with all this new music, here are pretty much all my thoughts on it: 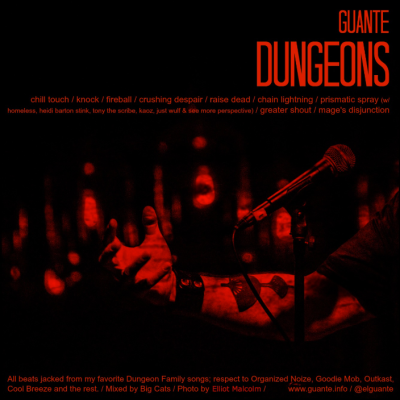 My plane touches down in Atlanta as I’m listening to the final mix of DUNGEONS for the first time. It’s just a stop on my way to New Orleans, where I’ll be performing at a conference on sexual assault prevention on college campuses, but it’s a nice moment. Hip hop is always about the conversation between past and present; these beats have roots in this city. I wonder how many people will hear that call and response, how much it matters.

Goodie Mob and Outkast were my entry points into hip hop. Before Wu-Tang, before Nas, before Pharcyde, before all of the other artists I’d name as influences, it was those two groups (and their extended crew, the Dungeon Family). Part of this project is paying homage; part of it is really highlighting how ahead of their time that crew was.

I’ve been extremely intentional about everything in my career so far. DUNGEONS is really the first project I’ve done just because I want to, just to clear my head. Some songs are leftovers from the You Better Weaponize sessions. Some are kind of random freewrites. I wrote “Crushing Despair” when I was like 19. Some are brand new songs written to bridge these other songs together into a cohesive whole that can almost be called a concept album. Some of them are really good, some of my best writing. Some are okay.

That’s part of the theme here, at least for me. Letting go. Moving on. The mixtape isn’t perfect, but I need to put it out, to get it out. I’m always haunted by old songs. But what could have been a random collection of cannibalized rejects (like a lot of mixtapes) has kind of turned into something I can be proud of. Again, it’s not perfect. The posse cut is kind of… messy. None of the songs are catchy pop hits. It gets a little unwieldy at points. But it’s very much an authentic documentation of where my head has been at this past year.

So what’s the concept? It probably makes sense to start with what isn’t the concept first. It’s called DUNGEONS because all the beats are jacked from Dungeon Family songs and all the song titles are Dungeons & Dragons sorcerer spells, level one through level nine. But those are both just organizing principles, arbitrary rules I set for myself to help focus my writing. The actual concept is something more than a gimmick.

The album talks about bullying, about economic and social violence, about resistance and activism, and more. A running motif is the power/magic inherent in language, how words shape reality. That’s getting close to the concept, I guess. I don’t want to over-explain this one (ha). It is what you take from it.

I probably tend to over-explain my work because it’s always going to be under-explained elsewhere. We’re all underrated. Every MC I know doesn’t get the attention they deserve. A masterpiece LP, a new single, a mixtape, a promo video, a show announcement– they all get the same amount of ink, the same cursory glance, the same obligatory surface-level props. We’re all pigeon-holed, often early in our careers, and we can never shake those labels. Releasing a rap album is like having a kid, being a great parent for five years, and then dropping that kid off on the very first day of school; it’s just that the “school” is full of 19 year-old drunk white boys.

I’m not too stressed about this one, though. Because I made it pretty much just for myself, it’s okay if it doesn’t get ten thousand downloads in the first week. I’m not doing any videos, singles, release parties, or even a big press push. But this whole decision-making process HAS made me think more about what success looks like, and what I want to be doing in the years to come.

It’s as easy to rationalize success as it is to rationalize failure. I know I’m not alone in this– the life of an artist (I’m happy to say this is my actual job, and has been for 2-3 years now) is a constant inflation and deflation of the ego. On the negative side: everyone’s playing bigger shows than me, this new video has more YouTube views than my new video, this other artist gets more love from the press even though they have nothing to say, etc. And on the positive side: my work has a much larger impact because it’s actively challenging the audience with specific critiques and action points, I probably make more money on the college circuit than a lot of better-known MCs on the club circuit, even when my videos have fewer views, they’re actually saying something important, the people I respect respect me, etc.

And both sides of this dance make good points. For me, I know that I AM doing really good work and having a concrete impact on my world. I also know, however, that I could have a much bigger impact. There’s always a new plateau.

So what does all this have to do with DUNGEONS? The project is fairly obviously not about me getting famous. It’s not a good promotional strategy to say that this is a “stepping stone” or “detour,” but that’s kind of what it is. That “next plateau,” for me, isn’t necessarily selling out the Mainroom or getting posted on all the big rap blogs. That’s not defeatist; that’s having an intentional strategy and making my own way. The more experienced I get, the more I figure out what my strengths, passions and experiences are pointing me toward. And I just caught a clear glimpse of that this past year.

In some ways, DUNGEONS is wholly unrelated to that “something” I caught a glimpse of. In other ways, it is inextricably bound to it. I hate to be abstract and mysterious like that, but I’m hoping it’ll all make sense in time. Thanks for listening.