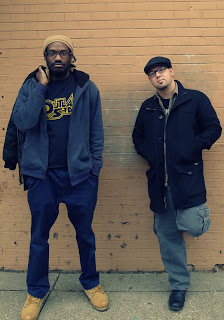 The new album is here. Thanks so much to everyone who pre-ordered it, came to the release show, and had a hand in putting the project together. I will likely do a follow-up post with some more notes and thoughts on specific songs, but for now, just wanted to get this out there (although I will share a few more general reflections below).
As always, the only real way people will hear this is if you share it– on social media, in real life, however. All of those RTs, re-posts, and emails make a real difference– and me and Katrah-Quey really, truly appreciate it. I’m not really expecting this one to blow up on the rap blogs, haha. Word-of-mouth is everything.

Also, because you can’t release an album without some kind of video too these days, here’s a video of me performing the last two verses on the album (which work as a pretty good encapsulation of the whole primary theme of the album, as does this video I released last week) a capella:

Finally, I’d like to share a couple of thoughts and reflections, especially since this album is attempting to do some pretty specific things.

1. First of all, huge thanks to all of our guests: Tony the Scribe, Jayanthi Kyle, GP Jacob, Tish Jones, Lucien Parker, See More Perspective, and Laresa Avent. We knew going into this project that because of the subject matter, it had to be a collaborative album. We had to feature more than just my voice and perspective. And all of the guests we got are not only phenomenal artists, but also people who walk the walk too– as organizers, educators, and advocates in many different spheres. If I can give myself a compliment, it’s that I’ve always been very good at choosing people to work with, and this album might be the best example of that yet. 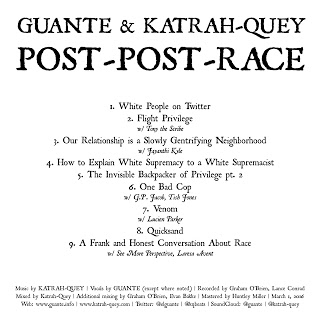 2. I’ll leave it up to you to decide whether or not we succeeded, but there were three kind of “guiding principles” for this project. One was collaboration, which I mentioned in the last point; one extension of that idea, though, might be that we wanted to have an intersectional lens. “Venom,” for example, is as much about class as it is about race. Throughout the album, we talk about oppression both along racial lines and more generally– the goal is to make POWER visible, to see how it flows and functions (which relates to the next point too).

Two was criticality— the idea that if we were going to do a hip hop album about race, it had to push further than saying stuff like “racism is bad” or “privilege is a thing that exists” or whatever. If the album has a theme beyond “songs about race and racism,” it’s pushing back against the narrative that race doesn’t matter, that we live in a “post-racial” society. But on an even deeper level, it’s exploring the idea of racism as something bigger than interpersonal dislike or even hate– it’s about history, it’s about trends and patterns, and it’s about systems of power. This might be the single biggest thing that a lot of people don’t *get* about race and racism, and a bunch of the tracks explicitly tackle that.

The third point here is communication— as mean as this album can be, and as radical as it might be to some listeners, it was important that the album “let people in,” so to speak. The very first track might piss some people off, but it’s also about immediately attempting to let people in on the “joke” (while affirming that the joke isn’t funny). Winning an argument isn’t about the other person immediately, explicitly saying “oh I get it now;” it’s about presenting a new frame of understanding that might impact how they think weeks, months, or years later. Almost every song on this album is attempting to present deeper, more critical frames of understanding– not to indoctrinate anyone or make them think exactly like I think, but to encourage questioning and critical thinking.

This will likely be a longer post later, but I also want to state that it was important to me to make the points I wanted to make. That might sound weird; I just think that sometimes in art, we sometimes over-value a kind of detached, above-it-all, hyper-metaphorical or imagistic subtlety. So yeah, this album is pretty damn direct, sometimes blunt; but neither “blunt” nor “subtle” are universally good or bad. They’re tools. Subtle art can be brilliant, but it can also be empty. Blunt art can be boring, but it can also be transformative.  It all depends on what work you want your art to do. Again, I’ll try to expand on this later, because I’ve been thinking about it a lot.

3. My half of the profit from this album goes to TruArtSpeaks; if you follow me here or on social media, you probably already know about them (full disclosure: I’m currently the managing director of the organization while Tish Jones is on a fellowship in Oakland), but if not, check them out. This video is a fantastic introduction to the work that we do.

I could keep writing. A lot went into this project. Thanks again for listening.