This is an older poem (in my book, it’s called “Cartpushers”), but it’s probably one that not many people have actually heard. I’m happy to finally get quality footage of a decent performance. We ran with a different title for the video, hopefully something a bit more evocative. Two quick notes:

1. This poem is about the first job I ever had, and is dedicated to all the cartpushers, cashiers, drivers, servers, bartenders, and other service workers out there. For me, a fundamental pillar of spoken word is the idea that everyone has a story, and every story matters. So one of the most powerful things we can do is tell the stories that most people never choose to hear.

2. This poem also, for me, illustrates something I really appreciate about slam poetry as a style (which is, of course, a generalization, since a slam poem can be whatever you want it to be… I’m thinking more about tropes/formulas/common approaches): this isn’t a poem that really “works” until you hear the last line. Everything else builds up to that. There aren’t a ton of IG-ready quotes to share; it’s really about the whole being more than the sum of its parts. I think spoken word is uniquely situated to build these little three-minute “experiences,” and this poem falls into that tradition.

As always, I appreciate when people buy my book, but I also like to make the text available:

CARTPUSHERS (THE FIST THAT LIVES IN YOUR NECK)

It’s not rocket science. It’s a ten-foot piece of rope with a hook at the end; we got three of ‘em hanging in the equipment shed—one of ‘em is thicker, but a little shorter; one of them looks thin as shoelaces but it’s a half-foot longer. If you got first pick, take that one—looks flimsy, but trust me: you’ll break before it does. Try to keep up.

Just be careful. Because these people: they’ll look right through you when they back out of those spots. When they take that corner at thirty miles per hour. When they forget that they forgot to use a blinker and cuss you out for walking through a crosswalk.

See, to that guy, we’re just background noise, uncredited extras in the eighty-year long made-for-TV romantic comedy that he calls life. We are neurons flickering stupidly, infantry stomping through the dreams he won’t remember upon awakening.

So make sure you wear comfortable shoes. Boots in the winter. Sneakers in the summer. Add pads as you grow older. Grow older. Learn to control a convoy of carts without that rope; just balance, coordination and will. Learn to control the fist that lives in your neck.

When these people just leave their carts sitting in the middle of a parking space, swallow. When they look right through you, swallow. When it’s fifteen below and a straightjacket would be warmer than these flimsy company coats and you’re working a double shift because you’ve heard rumors of layoffs, and the dapper manager saunters up and says how’s it goin’ chief? …swallow.

Understand: they will never understand this. The beauty of a parking lot at twilight, how the sky burns blue. The sweetness of every second when the big hand is on the eleven. The smile of the person who actually looks at you. We betray ourselves for seven dollars an hour. Our native language is white noise.

Cartpushers, cashiers, janitors, servers, bartenders: we are an army fighting a war we don’t believe in, in a country whose name we can’t pronounce, but we’re fighting. And we’re tired. But we’re fighting.

And we’re losing. But we’re fighting.

You get two fifteens and a half hour for lunch. Those breaks aren’t for your body, though. They’re for your spirit. See, with an eight-hour shift broken up into quarters, that’s just four two-hour shifts.

After punching in, chatting with the MOD and putting your gloves on, you can glance at your watch and say Wow. I’m almost halfway to being halfway done with half of half of half my shift. It makes the time fly right by.

You’ll be fine, kid. Just remember: smile. You’re representing the company. Remember: say hello to people when they come in.

And remember: when they look right through you, you’re still there. 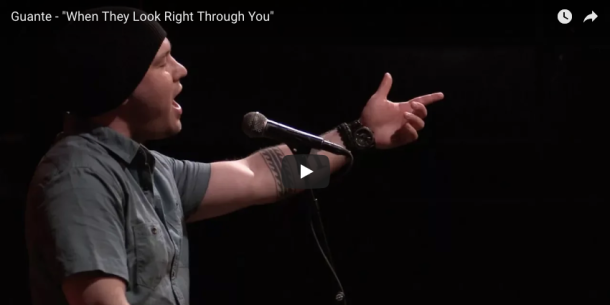